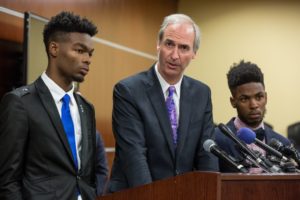 In October of 2015, Metropolitan Police Department officers brutalized Jason Goolsby and Michael Brown, two black 18-year-olds on their way from volunteering at a troubled youth center. After almost two hours of unwarranted detainment and severe physical and psychological assault, the officer told Jason “It was a misunderstanding. You are free to go.” This case is one of the hundreds of instances of police violence and discrimination toward black people annually, who comprise only 13% of the US population, yet make up 24% of those killed by cops. (Mapping Police Violence)

Jason and his friend walked to a CitiBank to withdraw money for a studio session later that evening. They waited to withdraw the money, as the studio owner told them the session was going to be canceled. As he stood to decide whether to take any money out, he opened a door for a white couple and their baby. He and Michael left, heading to a bus stop to go visit his brother at Howard University. As he crossed the street, a police SUV sped up and drove straight at him; he jumped onto the curb, barely avoiding being run over. He was confused as to why a cop would drive directly at him.

A white MPD officer emerged from the car, with one hand on his gun and the other on his pepper spray, and told Jason to get down on the ground or he’d pepper spray him. Jason told the officer he hadn’t done anything wrong, and he did not want to get down because he knew what would happen if he did. The officer would seriously hurt him.

Jason believed that the officer was going to shoot him, incidents such as Freddie Gray flashing in his mind. He ran away, but eventually, the officer tackled him. He screamed as he felt the officer trying to break his arm. The cops also mishandled Michael. The two sat handcuffed on the ground for almost two hours, only to be told they were free to go and that it was a “misunderstanding.”

The officer who ran him over, chased him, and tackled him also said: “a woman called and said that you made her feel uncomfortable.”

There was zero probable cause; these two men were peacefully going about their lives.

Jason and Michael are outstanding men. Jason gives back to his community, attending open meetings with Mayor Muriel Bowser, representing his high school Richard Wright Public Charter School at the White House and at local arts initiatives and youth programs. At the time of the incident, he was a freshman at UDC. Michael Brown was a senior at Richard Wright at the time. He too has impeccable character and shares Jason’s passion for the performing arts. They are not criminals; in fact, they are model citizens.

The cops brutalized these men solely because they are black – which, of course, is not a crime. This story is not unlike the recent Amy Cooper incident, in which a white woman felt “uncomfortable” by the presence of a black man and called the police. Our firm is committed to pursuing justice for victims of police brutality and discrimination.